Counting Stars, not parasites for once!

There are times in my PhD when  I feel overwhelmed by the amount of data I have to process on my own....although compared to some scientific disciplines, I have got off reasonably lightly! At the Gatsby Annual Network Meeting, Chris Lintott, Professor of Astrophysics at Oxford University, Introduced us to one solution - take to the web and recruit an army of virtual helpers!

"The problem of having too much data is now present across all the sciences but astronomy got there slightly earlier" Chris began. Most famous for presenting the BBC series The Sky at Night, Chris has spent his research career investigating whether there is an underlying structure to the universe. "In some parts of the universe, there is a lot of stuff and in others, not so much" he said. "It may seem random but there does seem to be some sort of honeycomb-like structure to it all..." One way to test this is to look at the shape ( or 'morphology' if you want a more technical term!) of galaxies as "the shape of a galaxy can show us the interactions that formed it - like an integrated history of 30 billion years".

In the early days, when the most modern telescopes could only photograph so many galaxies at a time, the Professors themselves would study these images. In the 1980s, technology improved so that thousands of galaxies could be captured at once, so the job was passed onto PhD students, the traditional 'willing workhorse' of the lab. But now up to millions of galaxies can be imaged and the field has hit a data processing wall.  You might ask, surely the minds that built these telescopes and satellites could work out a way to automate the process? Unfortunately not. "The job involves recognising fuzzy patterns and you just cannot teach this to a machine with 99% accuracy" said Chris. But PhD students can only do so much (and I should know!). Chris cited the example of Kevin who managed 50,000 galaxies in a week before "telling us where to stuff it". After  bribing Kevin with beer and begging the Vice-Chancellor for more PhD students both failed Chris knew he needed a radically new solution. 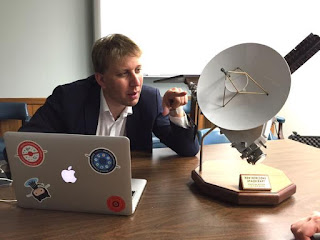 And so in 2007, GalaxyZoo was born. The idea was that interested members of the public who wanted to do their bit for science could sign up, classify a few galaxies in their lunch break and so help Chris and his colleagues work their way through the mountain of images. Although their expectations were low, within a day of launching the website had rocketed its way to the top of the BBC NEWS story board ( just pipped to the first post by 'Man flies to wedding a year early...'). Chris and his colleagues could hardly believe it - people actually wanted to get involved and help! "We were soon doing a Kevin-weeks' worth of classifications in an hour!" he said. The researchers realised that they had created a "distributed supercomputer" - albeit one with opinions and which volunteered it's time in unpredictable ways. In addition, they realised that this collective approach significantly improved accuracy; after all, if 7 out of 10 people think a galaxy has a sprial shape, the estimate of confidence is greater than a single person's verdict.

Another advantage of using people rather than machines soon became apparent. Whilst computers can only look for what you tell them to, "people can become distracted by the unusual". Perhaps the most famous example of this is Hanny's Voorwerp, a rare astronomical phenomenon spotted by Dutch school teacher Hanny van Arkel. After noticing a strange green 'blob' on one of the GalaxyZoo photographs, she mentioned it on the website's discussion forum, where it caught Chris's attention. "Everyone was referring to it as a 'Voorwerp', which we thought was a very technical term, so we used it too" said Chris. "But it turns out it actually just means 'thingy' in Dutch". It also turned out that the blob in question was a 'quasar ionisation echo', where a powerful emission of light triggers star formation. In short, the astronomical world was delighted, Hanny became famous and GalaxyZoo participants rushed to be the next to put their name to a new Voorwerp.

This might be helping the researchers to solve the riddles of the universe but now there was a new mystery: why exactly did ordinary people feel compelled to spend time sorting through photographs of galaxies? Surprisingly, when GalaxyZoo participants were surveyed, only 12.4% gave an interest in astronomy as a reason. By far, the most powerful incentive was a genuine desire to contribute to science. "There is clearly nothing magical about galaxy morphology itself" said David. "Rather, this was something that anyone could do in their lunch break to feel useful".

This suggested that similar online projects on different topics could also be a success. And so, in December 2009, Chris helped to launch Zooniverse, a general platform for 'poor sod' projects ( as in ' Which poor sod is going to have to sort through all this data on their own?'). Since then, this repository has only grown and grown - now you can count penguins, spot wildlife in the Serengeti, identify rare orchids and help sort through the archives of the Natural History Museum to name but a few. These online interfaces are also being put to uses beyond curiosity-led research : during the disaster relief efforts following the Nepal earthquake, online volunteers helped to spot affected villages on aerial photographs that were missing from official maps. Meanwhile, biodiversity surveys are already demonstrating the impacts of climate change, including documenting plants that are now flowering up to 10 days earlier.

But won't people eventually get fed up with looking at galaxy photographs? ( even the hardcore devotees that have clocked up a million galaxies so far?) And surely the growing choice of projects will mean that fewer people will participate in each of them?  Possibly, but Chris is already using the data generated from GalaxyZoo to preempt loss of interest. "These projects are themselves fascinating studies of human behaviour" Chris said. "We can now model with 70% accuracy a person's drop out rate within the next five galaxies". Hence, at the critical moment, the participant is automatically sent a grateful email, reminding them of their valuable contribution and to encourage them to keep going! Some projects try a 'gamification' approach, including the protein-folding game, FoldIt. Here, participants manipulate a protein structure to find the most energetically favourable structure ( and thus,the most probable structure to occur in nature). By solving these 3D puzzles, participants can access higher levels and harder challenges.

But as satellite technology advances ever onwards, and the data mountains grow ever higher, oerhaos one day even online volunteer networks will not be enough. So now researchers are investigating whether it is possible to use the wealth of results generated so far to educate a machine to do the job automatically. "After all, the face-recognition system on FaceBook uses a similar principle" said David. "Every time we tag someone, we are training a machine to do it automatically next time".

It can only be a good thing to make scientific research more accessible to the public who, after all, fund many of these projects through their taxes. Furthermore, online platforms demonstrate that you don't need a degree to help investigate the unexplained. Now...I wonder if I can convince anyone to help me count the number of parasites in my photographs?

What could you do in five minutes each day? Go to http://www.galaxyzoo.org or https://www.zooniverse.org to find out more!
Posted by Searching for Content at 02:18