Standing up for Science!

I seem to be travelling to Manchester a lot recently - this time it was for the Voice Of Young Scientists (VoYS) Media Workshop. These workshops are held several times a year across Britain and aim of giving early career researchers the tools to make their voices heard in public debates about science. Given how easily scientific facts can be distorted by the media, it is crucial that researchers are aware of how they can stand up for the truth.

In the first panel - Science and the Media - the hot topic was the potential pitfalls of scientists being interviewed for the radio. Whereas live shows risk you fluffing your lines or dealing with a rapid barrage of questions, recorded interviews have the downside that your material may be heavily cut down and your vital point missed out. The panel's advice was to prepare a bullet point list of the key facts and messages you want to get across. If you're thrown an off-topic question, simply make like the politicians and repeat parrot-fashion the answer to your own question! Also, be prepared for some bizarre requests; for instance, despite working on child abuse, senior research fellow Susanne Shultz found herself asked to comment on everything from a baboon which had escaped from a safari park to 'the science behind Planet of the Apes'. Although such experiences have made her ask at times  'Is this what my life has come to?', some of these did become invaluable opportunities to introduce advanced concepts (e.g. adaptation and cognition) to a new audience. They do say that no publicity is bad publicity...

We then reorganised the furniture for some group work before lunch, to discuss the good and bad aspects of science coverage in the general media. With most of us being PhD students, we covered a fair amount of disciplines from tropical butterfly evolution, computer imaging of embryos and the science of antidepressants! But we all shared similar views of science journalism - whilst it does invaluable work to inform the public and inspire the next generation, once misinformation goes mainstream, it can be very difficult to correct. 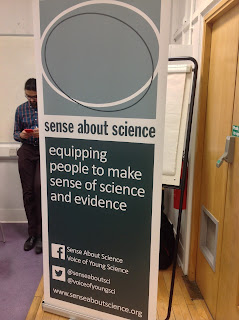 Our speakers for the second panel - What journalists are looking for- demonstrated how it is possible to come into science communication by very different journeys. Vic Gill, science journalist at the BBC, took the traditional route of a Master's in Science Communication, while Akshat Rathi, journalist for the digital news outlet Quartz, managed to make the break from academic research. Key for him was increasing his exposure over time by blogging and finding mentors who "helped me to murder my words down and who bashed the scientist out of me". Both also acknowledged that luck played a big part in landing them in the industry although Vic reminded us that the best thing you can do is to "network, network, network"!

Although journalists have a bad name for making scandals out of science, Vic and Akshat were keen to set the record straight : most journalists don't want to be inaccurate and are similar to scientists un that "both professions are trying to find the truth". Despite the dubious studies that do make the headlines, we aren't aware of just how much BAD science never makes it into press! Meanwhile, there are many things scientists can do to help journalists make their reports as accurate as possible. The earlier you prepare a press release ( preferably BEFORE any embargos have been lifted), the more time journalists have to check their facts and do their own research. And as soon as your research goes public, make yourself available to answer any enquiries - entrenched in the slow world of academia, scientists  often don't appreciate the different timescales journalists work to!

After we had discussed in our groups the barriers which prevents more scientists from engaging with the media, our final panel - Standing up for Science:the Nuts and Bolts -  showed us just some of the opportunities to get involved. Chris Peters, from Sense about Science, introduced us to the Ask for Evidence campaign, where members of the public challenge companies /brands to prove the claims they make about their products (see blog post for October 2014). Simply asking "Where's the evidence?" may be quick and easy to do, but it has achieved great things, including forcing Coca Cola to pull their so-called "Detox water" off the shelves. Meanwhile, Hayley Gorton, a pharmacy researcher at the University of Manchester, found that things rapidly snowballed once she started blogging and speaking at local events, such as the Pint of Science Festival. Soon she found herself recommended by others to speak at conferences, and even being paid for her services. "People will bite your arm off if you're interested in science communication" she said, emphasising how small beginnings easily cascade once the word gets out about your expertise. There can be too much of a good thing however - although preparing for such events gets easier with the more you do, "you have to treat it as a hobby really and be careful that it doesn't eat into your work time".

It's certainly given me a lot of ideas for how I can increase my "scientific profile" within the media world. And with that, I would just like to thank VoYS for a great day and for all the work they do in standing up for our science!

Sense About Science Media Workshops are open to all PhD students, postdocs and equivalent in their first job and are free to attend. Click here to find out more.

To find our more about the Ask for Evidence Campaign, click here.
Posted by Searching for Content at 09:14